No one knows how long the human race will survive. If they do, things will not be the same anymore.

Though this article only suggests a few changes of features on our face, it is most likely that many of our organs and body parts will change entirely over time.

A speculative look at how advanced genetic engineering technology might reshape people’s faces over time. 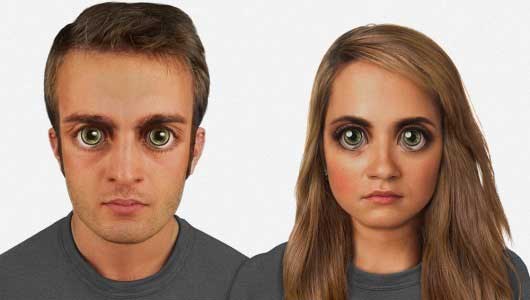 The future is always unknown, especially the distant future, but that shouldn’t stop us from making educated guesses. That’s exactly what artist and researcher Nickolay Lamm did with help from Dr. Alan Kwan, who has a doctorate in computational genomics from Washington University. Their starting point was the question: “What do you think the human face might look like in 100,000 years and why?”

From there, they reasoned out how humanity with advanced genetic engineeringtechnology might reshape itself over time, taking over the role played by natural selection so far. Lamm then created a series of images of what he thinks the human face might look like 20,000 years, 60,000 years and 100,000 years in the future (Note: He said that we shouldn’t read too much into the fact that the man and woman are Caucasian because those were just the best models he could find). 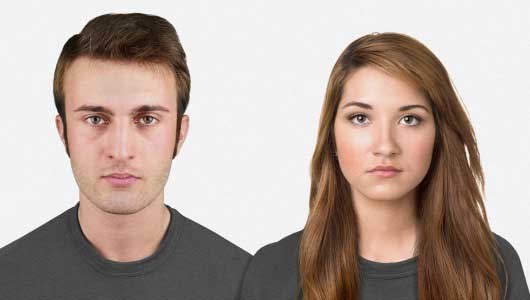 The first image is an unmodified photo of a man and woman from the present. Nothing special. 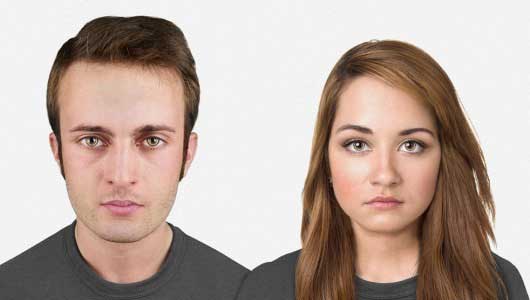 This one shows some changes, but they are not too major yet. Heads are a bit bigger to accommodate larger brains, and those yellow rings that you see in the models’ eyes are special lenses that act kind of like Google Glass does today, but in a much more powerful way. 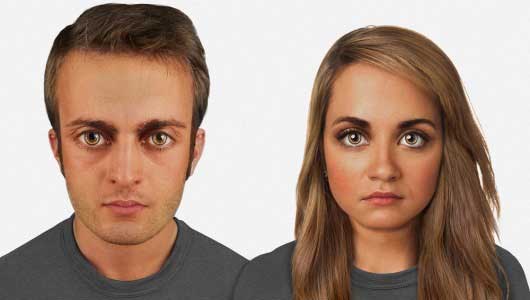 In the 60,000 years image, we’re starting to see some major changes. Heads are even larger, but the eyes have grown too. Lamm speculates that this would be a result of human colonization of the solar system, with people living farther away from the sun where there is less light. Skin pigmentation would change and our eyelids would become thicker to offer more protection against UV rays for those living outside of the Earth’s protective ozone layer.

100,000 years! Here Lamm predicts big changes, the most notable of which is the big Japanese Manga-style eyes that may feature “eye-shine enhance low-light vision and even a sideways blink from re-constituted plica semilunaris” to offer extra protection against cosmic rays. These futuristic faces follow the golden ratio proportions and are perfectly symmetrical from left to right, and have larger nostrils to make breathing in off-planet environments easier, as well as denser hair to contain heat loss from their even larger heads. Various implants might allow the man and woman of the future to always be connected, but these would be subtle and almost invisible.

Now remember, Nickolay Lamm and Dr. Kwan stress that this is not a prediction, but rather speculation (“one possible timeline”), and that it is impossible to know for sure what the future holds. This is just their answer to the question “What do you think the human face might look like in 100,000 years and why?” There are, without a doubt, many other answers, some of which might seem more plausible. But it’s interesting food for thought.

Personally, if I had to criticize this project, I would say that the timeline is probably too long. We’re already starting to have the ability to modify ourselves, so if we ever decide to do so (it’s probably a question of “when” rather than “if”), it probably won’t take thousands of years. Just in the past 100 years, we’ve gone from barely having mastered powered flight with the Wright Brothers to landing space probes on almost all planets and moons of the solar system, from Morse code telegraphs to a worldwide communication network made up of billions of electronic devices, each of which is more powerful than the supercomputers of a few decades ago. So technological and scientific progress is really fast and it’s accelerating. The human race’s capabilities in 50 years should be even more impressive to us today than today’s tech would be for someone from 50 years ago — and that’s saying something.

My own speculation on how humans might modify themselves over time would probably go into a different direction than Lamm’s — and  wouldn’t result in very striking images because I think most changes wouldn’t be visible. For example, if we successfully cure the diseases of aging (the SENS Research Foundation is working on this, for example), we would look the same, except that people would keep their young adult bodies, and you might not be able to superficially tell the difference between someone who is 30 and someone who is 60 years old. Maybe we’ll upgrade the human eye to give ourselves piercing hawk-like vision and awesome low-light capabilities, but that eye 2.0 might not look different from the outside. Same if we improve our red blood cells so they can carry 10 times more oxygen, our livers to better eliminate toxins or our metabolisms to maintain a healthy weight whatever we do. All these changes would be huge for humanity, yet they might not be visible in a photograph.

But all that is just speculation, one of many possible futures. The bottom line is we can all have an impact on how the future turns out, so let’s make it a good one.