You Must Know the Differences between a Heart Attack, Cardiac Arrest and Stroke 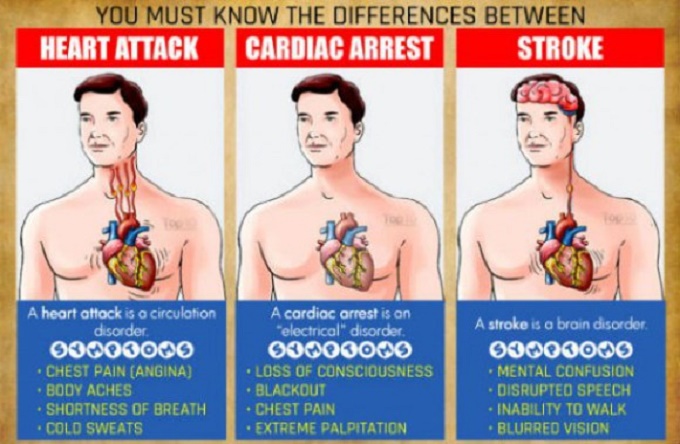 Most people are using these 3 terms interchangeably, “heart attack”, “cardiac arrest” and “stroke. Well that’s a mistake, since though they are all connected to heart, they have different reasons for appearing, as well as different symptoms and effects on the body.

Being able to distinguish these terms can be of vital importance in seeking the proper treatment, as well as helping someone with one of these conditions.

Read our post to understand what each of these conditions mean, what their symptoms are and how to properly react upon facing with them.

What Each of These Conditions Is

When the flow of the blood rich with oxygen is blocked to a certain part of the heart muscle, if not restored causes dying of the muscle, thus resulting with heart attack.

If a person has a heart attack, his/her heart continues beating.

If your heart’s electrical activity undergoes chaos, it’ll result with irregular heart beating, and immediate stop of the blood pumping throughout the body. This condition is cardiac arrest.

In this heart condition, the heartbeat stops completely.

There are three types of stroke:

These are the heart attack symptoms which can occur early on and last several days.

You can’t treat these symptoms with home remedies or medications, since they are connected to the heart, and not to the digestive or some other system.

In some cases, several minutes before a person experiences a cardiac arrest, s/he can feel similar symptoms to those of a heart attack

But in most cases of a cardiac arrest, the person will experience:

These symptoms are appearing suddenly and are often resulting in instant death.

Person who has suffered a heart attack has a greater risk of experiencing a cardiac arrest.

Teaching English in Shanghai or Hong Kong is one...
Read more
Vehicles

A significant factor that affects the fuel consumption of...
Read more
Business & Marketing

How To Start a Marketing Business

Starting a business is certainly an exciting venture, but...
Read more
Digital Media

How to Improve Your App’s User Experience

Learning how to improve user experience on an app...
Read more
Travel

What do you look for in a beach? If...
Read more
Home arrenging

5 Tips For Renovating Your Home

It cannot be denied that creating a new space...
Read more
Others

What to keep in mind when reopening your office

Most companies have done their best to keep their...
Read more
Real Estate

9 Burning Questions to Ask Before Renting a Co-Working Space

Co-working spaces have proven to be a relatively new...
Read more
Law & Attorney