6 Years After Raising Wild Gorilla He Introduces His Wife, Despite The Warnings, She Gets Too Close

When multi-millionaire conservationist Damian Aspinall introduced his new wife to two of his old friends, he didn’t expect to have to watch out for one of them stealing his wife from him. Especially considering they are gorillas!

Damian Aspinall bred two gorillas called Djalta and Ima from being small babies to 12-year-old, fully grown apes, before releasing them into the jungle. Four years on, it was time to meet them again in their natural habitat.

Damian wanted to introduce his wife, Victoria, to the good friends he had raised, but they had to tread carefully. Travelling through crocodile-infested waters, the pair finally reached the apes in their new home. The Western Lowland gorillas loved their new home so they weren’t initially too keen on people they didn’t know coming into their territory. 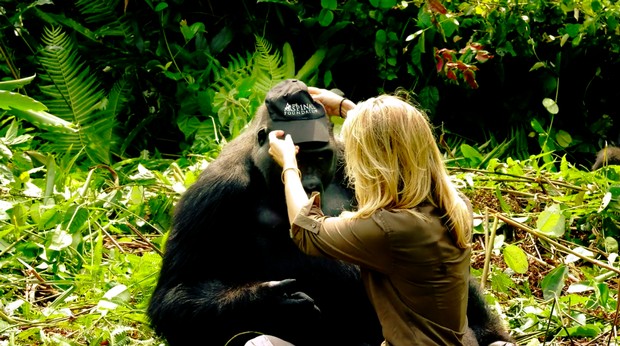 You might think that, after being left alone in the jungle for years, Djalta and Ima may not be too happy to see Damian. But the great creatures welcomed him back with open arms and even got friendly with his new wife on their first meeting.

After cautiously approaching the apes, Victoria became friendly with the 300-pound gentle giants and immediately fell in love. The encounter involved lots of hugs and attention, resulting in Ima stealing her hat and Victoria lying down in Ima’s lap, allowing him to play with her hair. It seems like Ima doesn’t want her to ever leave as their bond grows stronger over the encounter.

I think it’s fair to say that Ima and Djalta approved of Damian’s new wife; so much so, that they wanted to keep her for themselves.

Watch the video for yourself to see the amazing encounter and see if Ima manages to keep Victoria for himself. If you loved this video as much as we did, feel free to leave your thoughts below and share with your friends.