Here are the seven common mistakes made while performing automation testing 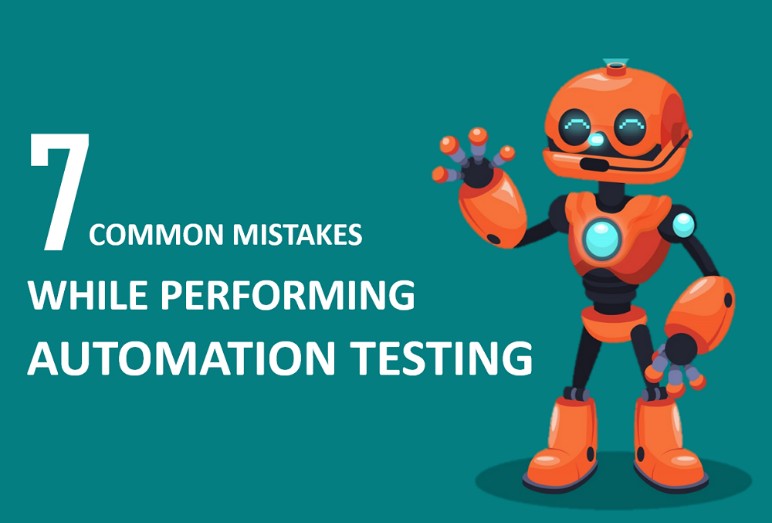 In today’s agile world, everyone is rushing off to start automating their testing workflows.  Automation Testing and automation tools have become an integral part of the software development process. However even though automation testing comes up with a lot of benefits, it’s not all flowers and rainbows. Automation testing comes with a lot of baggage attached and any carelessness can talespin the development process.

So, today, in this blog, we would be discussing the seven common mistakes that are made while performing automation testing and the ways through which you can deal with it.

One of the biggest mistakes that test engineers and enterprises make is perhaps using test scripts without any validation. How you can be certain whether the test you are running is giving you valid intel about the quality of product? Simply running scripts and automating the manual clicking process would not mean anything if the test scripts does not tell whether the product is not failing at unexpected areas.

Script validation can be performed by using the checkpoints. The checkpoints can detect the page parameters, web objects, and the text that might be present on the page.

You need to make sure that checkpoints are placed at various points.

A lot of testers depend on playback and recording for creating the test scripts. But the fact is, that the record feature should only be viewed as a potential way to generate a skeletal script. Besides this, it should be viewed rarely as the final step of the script creation.

So, if you are looking for effective automation testing, then you would need to customize the generated script.

Customization of the script involves adding the checkpoints for validation as well as data parameterization. Besides this, it also requires script modularization such that several testers can work at the same time.

Automation testing is an excellent way through which you can augment all your testing efforts. However, it is commonly seen that a lot of enterprises, as well as test engineers, often use automation testing as a replacement for manual testing. This is the reason they can’t achieve effective coverage and testing.

Ideally, automated testing should be used to improve the manual testing.

A checklist of features should be created, which can be used for automated testing. For example, you can create a web page having incoherent fonts and further test it. Make sure that you automate only a specific part of the script that would check for the fonts errors.

During the preparation of test cases, test engineers can sometimes commit mistakes that can result in inappropriate test cases. Hence, all these test cases don’t represent any application functions and flow.

You can create a few sample test cases confined into one single test suite that would represent the complete functional flow of the application.

It is commonly seen that test engineer while testing applications only consider visible validations. So, you need to make sure that the validation is not restricted to visible elements such as button, page text, etc.

It is necessary to have validations that would showcase that the process has been finished.

For instance, you have an order entry system for placing an order.

Further, you would definitely query the database to ensure that the order is saved in the right way into the database.

It is very commonly seen that test engineer perform automation testing with an obscure approach. So, if a clear software strategy is not implemented, then it can get challenging to measure success across the teams.

Craft a solution in which build verification tests are automated first followed by smoke tests and then a ” dealer’s choice.”  Verification and smoke tests are standard across teams, and they are more meaningful and measurable.

There are a lot of organization and test engineers who believe that the process of manual testing takes less time than automation testing. But, to be honest, it is not always the case. You have to be realistic about the number of times you run the test.

For example, if you run it manually within a sprint many times, then the manual testing process would take more time as compared to automation testing.

You need to figure out which type of testing matches with the goals of your project and the time it will take to produce the desired result.

A good enterprise or test engineer would utilize all the technologies and tools that are available such that the solution that they get is efficient and comprehensive.

Automation testing is indeed a valuable process, and thus if you avoid these common mistakes mentioned above, then it can give you fruitful results. So, just in case you have any queries in terms of automation testing, then feel free to reach out to us, and we would be more than happy to help you out.