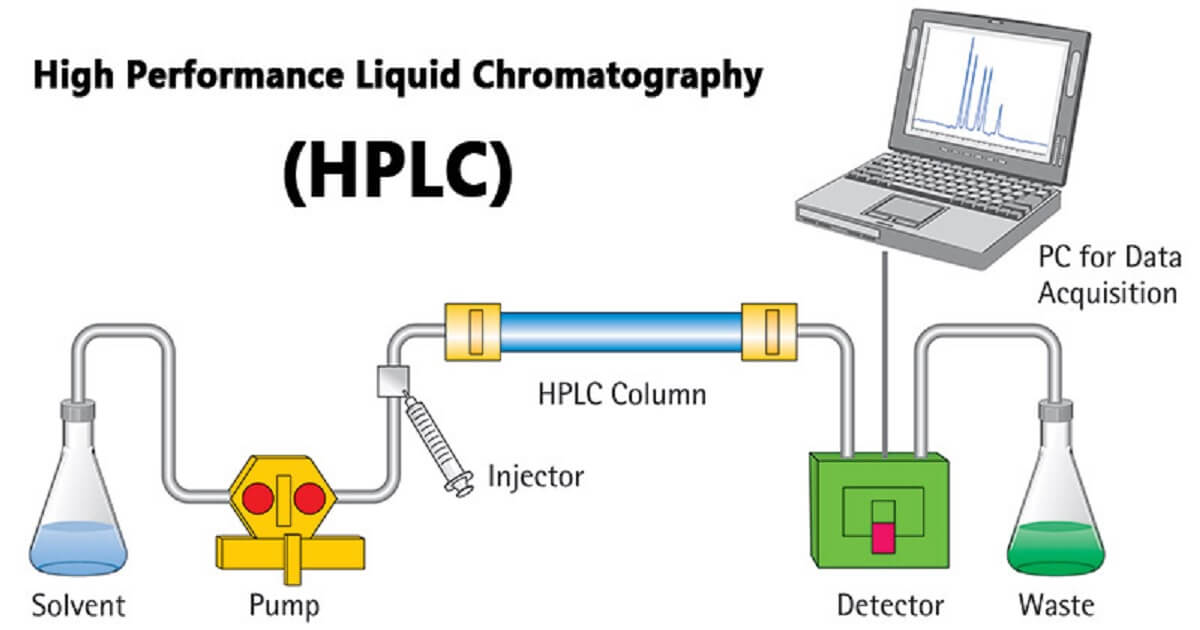 Chemistry is the study of the elements that make up the universe. These building blocks are of different forms and require many methods of analysis. High-Performance Liquid Chromatography has become such an essential aspect of chemistry. It helps to identify, differentiate and understand mixtures.

It is a technique, which is used in laboratories to separate the mixture appropriately. These mixtures are dissolved in a fluid such as water, solvent and sometimes gas, also known as the mobile phase. The mobile phase carries it through a column, plate or capillary tube and sometimes a sheet. These systems will get fixed on the material, which is known as the stationary phase.

What is High-Performance Liquid Chromatography?

Different instruments used are as follows-

Sample Injector– A sample injector provides injection within the range of 0.1-100 mL of volume in a liquid sample along with high reproducibility and high pressure.

Columns consist of polished stainless steel, 50 to 300 mm long and 2 to 5 mm internal diameter. They consist of a particle size of 3–10 µm in its stationary phase.

Detector– Fluorescence, UV-spectroscopy, electrochemical sensors and mass-spectrometric are in use as detectors.

How is it used?

Mobile phases include any miscible combination of water along with various organic solvents.

The most common organic solvent are-

Some techniques use water-free mobile phases. Therefore, in these types, the mobile phase in aqueous components contains acids such as as-.

Sometimes salts are also used to assist the separation of the sample components in these types.

It separates analytical compounds based on their polarity. The stationary phase is polar, whereas the mobile phase is the nonpolar mobile phase.

They use silica in its stationary phase and compounds such as hexane, chloroform, diethyl ether, methylene chloride in its mobile phase.

It operates on the principle of hydrophobic interaction. In this type, the stationary phase is hydrophobic and nonpolar, whereas it uses polar liquids, such as acetonitrile or mixtures of methanol and water, as the mobile phase.

It separates particles based on their molecular size. Therefore larger molecules are washed through the column, whereas the smaller molecules penetrate in the porous of the packing particles.

It is useful for ionisable or ionic samples. In these types, the ionically charged surface is the stationary phase, and an aqueous buffer is a mobile phase. The mobile phase has ionic strength as well as accurate pH, which thereby controls the elution time.

It is useful for the manufacturing of biological as well as pharmaceutical products.

It is useful for legal purposes, such as during the detection of drugs in urine.

It is also useful for medical purposes, such as detecting vitamin D and other substance levels in the blood serum.

They are used to measure the quality of soft drinks, and they also analyse the sugar and preservative content in fruit juices. They also explore the polycyclic compounds of the vegetables.

They are used to detect the endogenous Neuropeptides in the extracellular fluid of the brain.

They are used to detect the phenolic compounds in the drinking water and bio-monitor the environment’s pollutants.

HPLC has a significant role in different industries, contributing to chemistry in various sectors with its uses and impact. Therefore, it is very accurate that it is a tremendous boon for chemistry.